I was driving through the country side of France, thinking about how to find a perfect cover to play with our acoustic band, a catchy country blues tune, that you keep in mind for the rest of the day and probably more!

It was that time where I heard ‘My Bucket’s Got A Hole In It’, by Hank Williams, for the first time. After a few seconds of listening, I knew this was the one I needed to play. The chorus is easy, anyone can sing it; there are only 3 chords, the melody is simple and happy. It was a song we could play acoustic on the street and attract people to listen to our music.

We listened and played some others of the best country blues songs such as ‘Black Brown And White’ from Big Bill Broonzy, ‘Sweet Home Chicago’ from Robert Johnson… Bob Brozman also played a lot of country blues music: you can check the article about our cover of his calypso song ‘Uncle joe’. 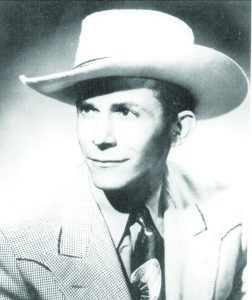 In my opinion, the best country songs have been written by Johnny Cash and Hank Williams. We covered ‘Folsom Prison Blues’, ‘Sam Hall’, ‘Hey Good Looking’… Hank Williams died at the age of 29, he is considered as one of the most influent country musicians of all time and had 11 number one country hits in his short career; he is recognized as the King of Country Music… Johnny Cash sold millions of records and played some of his tunes, I particularly love his version of ‘I’m so Lonesome I Could Cry’.

We couldn’t sound like these old country artists as we had more blues influences; anyway, it would be a big mistake to try to copy them. As I always believed, it would not make any sense to cover a song without adding our own personality and background. At that time we just started to play with the blues harmonica player Arash Khodayari which brought to our version of “My Bucket’s Got A Hole In It” a heavy country blues influence rather than sounding like a classic country song.

Since we decided to be an acoustic band, Ersin Erçin, our solo guitarist, replaced his electric guitar for a 6 string banjo also called banjo guitar, tuned as a normal guitar. This new sound, took us to a new direction and gave us a deeper identity in the country blues sound. We also decided to use it in my own original songs such as Hobo Blues.

We became probably the only street band of Istanbul playing country blues music! Big crowd of people was listening to us; smiling, happily dancing, clapping and buying CDs!

Here you can check a little video of us playing ‘My Bucket’s Got A Hole In It’ on the streets of Istanbul. You can also read the article about street music in Istanbul.